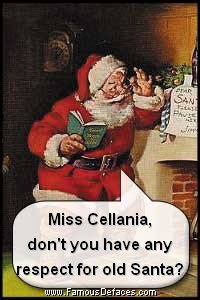 When my daughter asked me for the truth about Santa Claus, I explained (among other things) that he represented unconditional giving, meaning, you aren't obligated to give a gift in return when you get a gift marked "from Santa Claus". You don't have to feel overwhelming gratitude. All you have to do is be good all year! She digested everything I told her, then did what every kid does. She decided to believe in him for a couple more years for her little sister's sake. Yeah, right. She decided to believe because you get more toys that way.

The Christmas holiday has so many traditions and rituals connected to it that you can pick and choose how to celebrate. Many of these traditions and rituals have nothing to do with the birth of Christ. And the Clement Moore version of Santa has nothing to do with St. Nicholas. Santa Claus in his current incarnation reflects the secular, commercial, silly side of Christmas. Therefore, he is fair game, and this is open season. And I have just a little grudge against him, since he always leaves more gifts for my kids at grandma’s house than he does at ours. You can be sure that after this post, there will certainly be nothing for me under the tree this year.

A really nice flash greeting card. The kids will enjoy this.

Norad tracks Santa. Bookmark this for the kids for December 24th. The downloads page has a lot of fun stuff for kids. There's still time to email Santa throught the North Pole website. For a fast response, try this site. (Thanks, Wendy!)

Santa even designed his blog as accessible to children too young to read. A lot of it is available as podcasts. 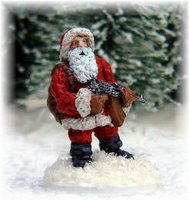 How far can you throw Slingshot Santa?

The classic Elf Snowball game. Try NOT to hit Santa. (Thanks, Dawn!) 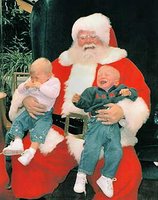 Nothing says Happy Holidays like a photo of sweet little toddlers screaming at Santa. 42 photos available this year.

How Santa resembles a System Administrator 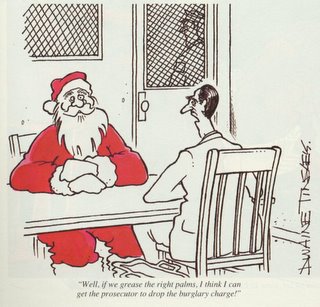 2. When you ask Santa for something, the odds of receiving what you wanted are infinitesimal.

4. When you ask Santa where he gets all the stuff he's got, he says, "Elves make it for me."

5. Santa doesn't care about your deadlines.

6. Your parents ascribed supernatural powers to Santa, but did all the work themselves.

7. Nobody knows who Santa has to answer to for his actions.

8. Santa laughs entirely too much.

9. Santa thinks nothing of breaking into your $HOME.

10. Only a lunatic says bad things about Santa in his presence. 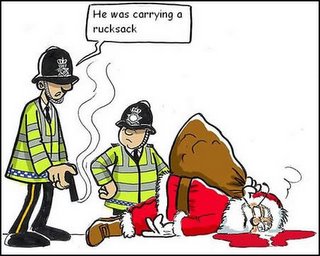 Santa may have a difficult job, but at least he's got the big bucks (and I ain't talkin reindeer)! (Thanks, Del!)

I regret to inform you that, effective immediately, I will no longer serve Georgia, Florida, West Virginia, Virginia, North and South Carolina, Tennessee, Mississippi, Texas, Ohio, Louisiana or Alabama on Christmas Eve.

Due to the overwhelming current population of the earth, my contract was renegotiated by North American Fairies and Elves Local 209. As part of the new and better contract, I also get longer breaks for milk and cookies so keep that in mind.

However, I'm certain that your children will be in good hands with your local replacement, who happens to be my third cousin, Bubba Claus. His side of the family is from the South Pole. He shares my goal of delivering toys to all the good boys and girls; however, there are a few
differences between us. 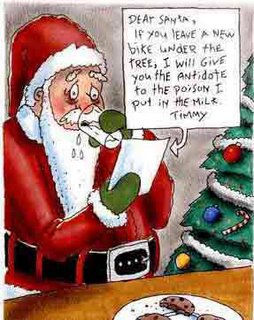 1. There is no danger of the Grinch stealing your presents from Bubba Claus. He has a gun rack on his sleigh and a bumper sticker that reads: "These toys insured by Smith and Wesson."

2. Instead of milk and cookies, Bubba Claus prefers that children leave RC cola and pork rinds (or a moon pie) on the fireplace. And Bubba doesn't smoke a pipe. He dips a little snuff, so please have an empty spit can handy.

3. Bubba Claus' sleigh is pulled by floppy-eared, flyin' coon dogs instead of reindeer. I made the mistake of loaning him a couple of my reindeer one time, and Blitzen's head now overlooks Bubba's fireplace.

4. You won't hear "On Comet, on Cupid, on Donner, and Blitzen..." when Bubba Claus arrives. Instead, you'll hear, "On Earnhardt, on Andretti, on Elliott and Petty."

6. As required by Southern highway laws, Bubba Claus' sleigh does have a Yosemite Sam safety triangle on the back with the words " Back Off."

7. The usual Christmas movie classics such as"Miracle on 34th Street" and "It's a Wonderful Life" will not be shown in your negotiated viewing area. Instead, you'll see "Boss Hogg Saves Christmas" and "Smokey and the Bandit IV" featuring Burt Reynolds as Bubba Claus and dozens of state patrol cars crashing into each other.

8. Bubba Claus doesn't wear a belt. If I were you, I'd make sure you, the wife, and the kids turn the other way when he bends over to put presents under the tree. 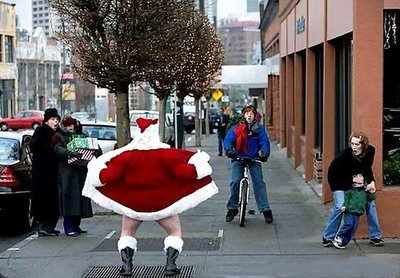 A Christmas card from a hunting supply company. (Thanks, Joe!)

The story of Santa Klauzinski.

Probably the rudest decoration you can buy: Farting Santa. 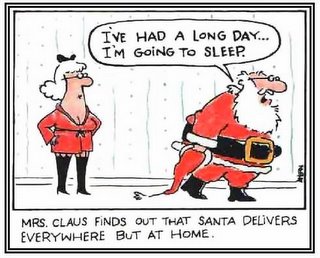 Santa Does Vegas (flash). Lady Luck was not with him.

Song: Santa Must Have Been Drinking.

I saw this picture dozens of times in the last few weeks. I thought, “too juvenile. Not funny enough.” Then I saw Jingle Smells. When I heard the music, I could NOT stop laughing. Yes, still juvenile, but now its funny!


Thought for today: Santa Claus has the right idea: Visit people only once a year. - Victor Borge

I saw a great sign the other day at an eatin' joint:

"Unattended children will be given espresso and a new puppy."