My goodness gracious, check out the imaginative and festive decorations some people are sporting this year!

I still have a lot of stuff that either didn’t fit in with the ten subjects of Christmas, or else came in to late for the appropriate category. Too much for one day (even after I discarded half of it), so tomorrow I’ll post a special kid’s version of Christmas links.

Make your last-minute requests to Santa through the direct line to the North Pole! Try this, it IS funny.

Its A Wonderful Internet is the internet version of Its A Wonderful Life, an interactive tale complete with levers and pulltabs for the illustrations.

Larry the Cable Guy reads a politically correct version of the Night Before Christmas.

There's a whole lot of Bad Santas out there.

Sing along with your chef in Ding Fries Are Done. (Thanks, ER!)

A Christmas Story reenacted by the angry alien bunnies, and their old classic, Its A Wonderful Life.

Which of Santa's Reindeer Are You?

Simon Sez Santa will do your bidding, along the lines of the “subserviant whatever” series.

A Christmas trivia quiz. I only missed the first question.

A real moldy oldie you may enjoy: I Yust Go Nuts At Christmas.

YesButNoButYes put out a top ten list of overdone decorations. Even better is their list of Christmas Presents You Shouldn't Buy.

John Stewart’s take on the War on Christmas. That one's funny, but this one is serious.

On a serious note, if you've put off buying a gift til the last minute, because the givee is one of those folks who has everything already, show your love by reading this, and make a purchase. 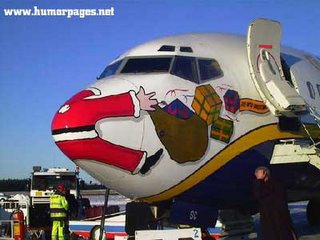 It was early December and I was at the airport, and loudspeakers blared annoying elevator renditions of cherished Christmas carols. Being someone who took Christmas very seriously, and being slightly tired, I was not in a particularly good mood.

With a considerable degree of irritation and nowhere else to vent it, I said to the attendant, "Even if I were not married, I would not want to kiss you under such a ghastly mockery of mistletoe."

"Sir, look more closely at where the mistletoe is."

"Ok, I see that it's above the luggage scale, which is the place you'd have to step forward for a kiss."

"It's there so you can kiss your luggage goodbye."

THE FOLLOWING MAY BE DISTURBING Yeah, like the previous links weren’t? NOT WORK SAFE or CHILD SAFE

The 12 Diseases of Christmas. (thanks, Carl!)

The Mistletoe and Meat Christmas Calendar.

No Christmas for You! A rant about politically correct holidays. 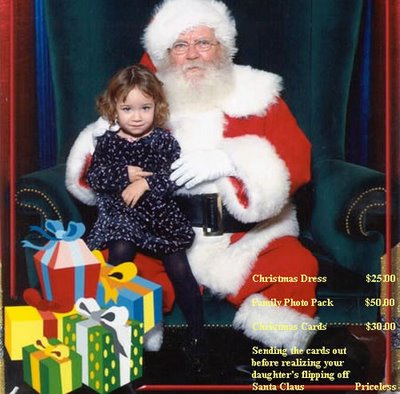 As a joke, my brother used to hang a pair of panty hose over his fireplace before Christmas. He said all he wanted was for Santa to fill them. What they say about Santa checking the list twice must be true, because every Christmas morning, although Jay's kids stockings were overflowed, his poor panty hose hung sadly empty.

One year I decided to make his dream come true. I put on sunglasses and went in search of an inflatable love doll. Of course, they don't sell those things at Wal-Mart. I had to go to an adult bookstore downtown. If you've never been in an X-rated store, don't go. You'll only confuse yourself. I was there almost three hours saying things like, "What does this do?", "You're kidding me!", "Who owns that?"

Finally I made it to the inflatable doll section. I wanted to buy a standard, uncomplicated doll suitable for a night of romance that could also sub as a passenger in my car so I could use the car pool lane. Finding what I wanted was difficult as love dolls come in many models. I figured the "vibro-motion" was a feature my brother could live without so I settled for Lovable Louise. She also was at the bottom of the price scale. To call Louise a "doll" took a huge leap of imagination. 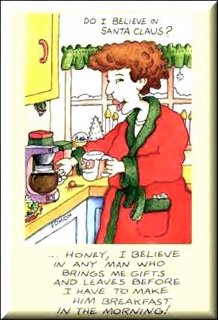 On Christmas Eve, with the help of an old bicycle pump, Louise came to life. My sister-in-law was in on the plan and left the front door unlocked. In the wee hours of the morning long after Santa had come and gone I snuck into the house and filled the dangling panty hose with Louise's pliant legs and bottom. Then I let myself out, went home, and giggled for hours.
The next morning Jay called to say that Santa had been to his house and left a present that made him VERY happy but the dog was confused. The dog would bark and bark. I suggested he purchase an inflatable Lassie. We also agreed that Louise should remain in her panty hose so the rest of the family could admire her when they came for the traditional dinner. It seemed like a great idea, except we forgot Grandma and Grandpa would be there.

My grandmother noticed Louise the moment she walked in the door. "What the hell is that?" she asked.
"It's a doll." replied my brother.
"Who would play with something like that?" she replied "And where are her clothes?"
"Boy that turkey sure smells nice, Gran," Jay said, trying to steer her into the dinning room. But Granny was relentless.

My grandfather, a delightful old man with poor eyesight, sidled up to me and said, "Hey who's the naked gal by the fire place?" I told him she was Jay's friend. A few minutes later I noticed Grandpa by the mantel talking to Louise. Not just talking, but actually flirting. It was then that we realized this might be Grandpa's last Christmas at home.

Dinner went well. We made the usual small talk when suddenly Louise made a noise that sounded a lot like my father in the morning. She then lurched from the panty hose, flew around the room twice and fell in a heap in front of the sofa. The cat screamed, I passed cranberry sauce through my nose, and Grandpa ran across the room, fell to his knees, and began administering mouth to mouth. My brother wet his pants and Granny threw down her napkin, stomped out of the room, and sat in the car. It was indeed a Christmas to treasure.

Later we discovered the cause of Louise's collapse as she had suffered from a hot ember to the back of her thigh. Thanks to duct tape we restored her to perfect health. Louise went on to star in several bachelor party movies. I think Grandpa still calls her whenever he can get out of the house... 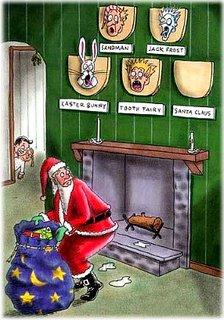 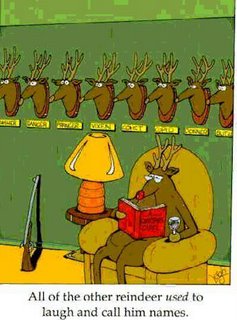 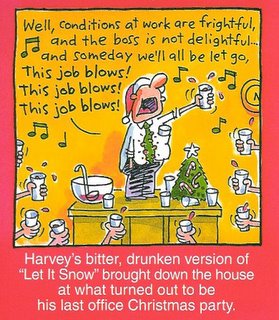 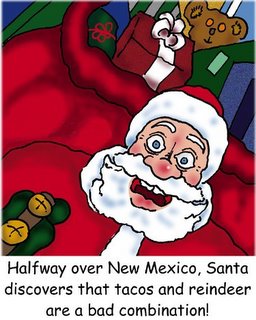 Thought for today: If there really is a pole at the North Pole, I bet there's some dead explorer guy with his tongue stuck to it.