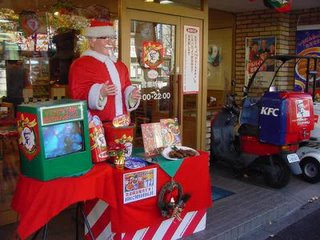 My older daughter told me her third grade computer class project is to research Christmas customs of other countries (calm down, Civil Libertarians, its a parochial school). The kids got to pick which country, but a Chinese boy picked China ahead of her, so she chose Japan. Hmm, I told her, the Japanese celebrate Christmas by eating Kentucky Fried Chicken. She gave me the stink eye and said “You’re making that up.”

I assured her I wasn’t making it up. I am privy to some strange KFC lore due to the fact that we live in Colonel Sander’s hometown. But this phenomena is well-documented, as my daughter learned from her research. Japan is only 1% to 2% Christian, so the Christmas they celebrate is pretty much appropriated from other countries. I was surprised to find its a romantic holiday, where couples traditionally go on a sweetheart date on Christmas Eve, whether its to KFC (where reservations are required) or to a hotel.

Leave it to me to use my child’s homework as blogfodder. 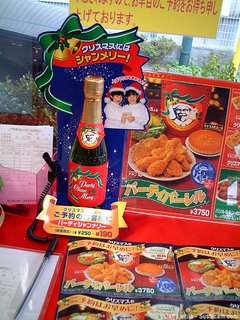 Maybe KFC is big for Christmas because Japanese ovens are too small for turkey.

Or is it all marketing?

Pizza is starting to give KFC a run for its money as a holiday meal.

Here’s one expatriate’s experience of Christmas in Japan.

There is evidence that KFC has been trying to make chicken into a traditional New Year meal, too.

BTW, the story of the crucified Santa is an urban legend. 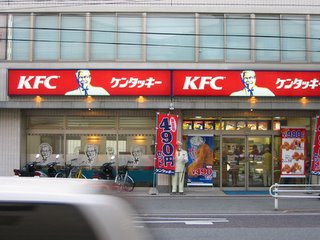 Thought for today: Why did the chicken cross the road? To prove to the possum it CAN be done!

Don't forget the KFC Buffet in Osaka the only in Japan
http://www.japansugoi.com/wordpress/kfc-buffet-in-osaka/