A Round of Links 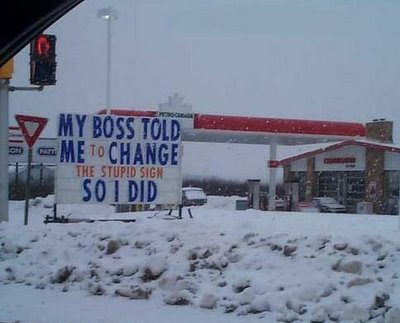 Boy howdy, you start playing Christmas for a just few days, and the links really add up! I've been busy dressing an elf. My older daughter is playing a department store elf in the Christmas play. You can't just go out and get an elf costume. You can't even get an elf hat. So I'm decorating a stocking cap and socks with fur and holly and jingle bells. What do you want to bet that when I'm finished, she will refuse to wear it? Meanwhile, I had collected twice this many links in the last week, but took out the ones that weren't the very top quality. Only the best for y'all.

Mousebreaker, a game to test your fine motor skills. I didn’t do very well.

Salad Fingers is one creepy cartoon. Keep sensitive children away.

Bad behavior will bite you in the end. Watch the cartoon Karma Ghost.

Bad jokes generator. I entered some friends’ names and interests and sent each one a personalized link. For an example, here is the short list for Miss Cellania.

Five voiceover artists in one vehicle equals this movie.

What can you expect out of a game called Knife Throw? I killed the girl several times before I figured out how to play it!

Cats are supposed to be so cool and graceful, so its extremely funny when they aren’t. This video is a collection of those moments. And here’s a postscript of sorts. 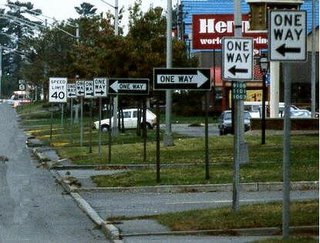 The first trailer for Pirates of the Carribean 2. If I let my younger daughter see this, it may take her mind completely off Star Wars for a few minutes.

Claymation video of Hello Kitty battling an evil robot in an arcade.

Where They Went Wrong: Superman and Batman spend the night together.

An architect built a holiday village for a mall in Metairie, Louisiana. He made it very realistic, with blue tarps in the roofs, a helicopter rescue scene, and anti-looting graffitti. Most people liked it, but just a couple of complaints and the mall had it taken down.

How about a little song? The Theme from Gilligan's Island sung to the tune of Stairway to Heaven. Don't be afraid to listen, its far shorter than the 7 minute original.

For the Regular Readers

Update on Alien Abduction: Forget the tinfoil hat, here are better ways to defend yourself from alien abductions. (Thanks, Jeremy!)

Update on Christmas Decorations: The creator of the hanging deer lights has a photo page on the process. (Thanks E R!)

A new pastor was visiting in the homes of his parishioners. At one house it seemed obvious that someone was at home, but no answer came to his repeated knocks at the door. Therefore,
he took out a card and wrote: "Revelation 3:20" on the back of it and stuck it in the door. 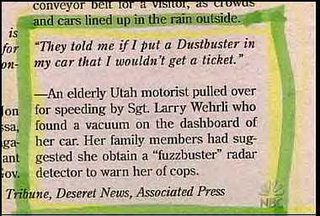 When the offering was processed the following Sunday, he found that his card had been returned. Added to it was this cryptic message: "Genesis 3:10." Reaching for his Bible to check
out the citation, he broke up in gales of laughter.
Revelation 3:20 begins "Behold, I stand at the door and knock."
Genesis 3:10 reads, "I heard your voice in the garden and I was afraid, for I was naked."

An old hillbilly farmer had a wife who nagged him unmercifully. From morning till night (and sometimes later), she was always complaining about something. The only time he got any relief was when he was out plowing with his old mule. He tried to plow a lot.

One day, when he was out plowing, his wife brought him lunch in the field. He drove the old mule into the shade, sat down on a stump, and began to eat his lunch. Immediately, his wife began haranguing him again. Complain, nag, nag; it just went on and on.

All of a sudden, the old mule lashed out with both hind feet; caught her smack in the back of the head. Killed her dead on the spot.

At the funeral several days later, the minister noticed something rather odd. When a woman mourner would approach the old farmer, he would listen for a minute, then nod his head in agreement; but when a man mourner approached him, he would listen for a minute, then shake his head in disagreement. This was so consistent, the minister decided to ask the old farmer about it. 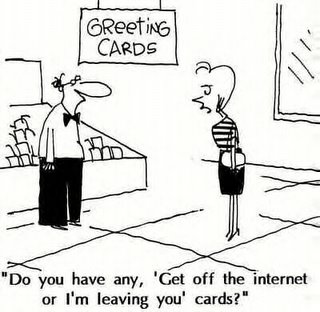 So after the funeral, the minister spoke to the old farmer, and asked him why he nodded his head and agreed with the women, but always shook his head and disagreed with all the men.

The old farmer said: "Well, the women would come up and say something about how nice my wife looked, or how pretty her dress was, so I'd nod my head in agreement."

"And what about the men?" the minister asked.

"They all wanted to know if the mule was for sale."

Thought for Today: Give a person a fish and you feed them for a day; teach a person to use the Internet and they won't bother you for weeks.

(you know, if you didn't live in Pennsyltucky...)