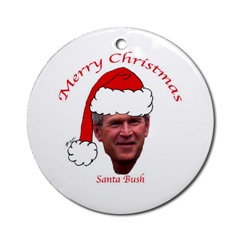 We cannot cover all the subjects of Christmas without paying tribute to our fearless leader, can we? Christmas at the White House is always such a wonderful PR opportunity. And the way Dubya and those around him are blowing their opportunities just gives me more funny stuff to share with you.

If Dubya wants to play Santa Claus, he COULD focus on the soldiers on two fronts who would like to be with their families for Christmas, the millions of American who have no health insurance, plus those who have no job or else no job security, those who cannot afford to grow old, and those who still cannot go home to NOLA, and lets not forget the wildlife that just wants to survive. Then there's that pesky Bill of Rights thing.

White House Christmas cards. These are jokes, of course, but Dubya has gotten into trouble with his own base by sending out Christmas cards that say Happy Holidays. How offensive can you get? No, the question is how offended can you get! It just goes to show there are people nuttier than our prez.

Dick Cheney Christmas cards (you can buy these!)

I’ve posted this before, but it fits well here with the gift-giving aspect of Christmas: the Give Bush a Brain Game.

The 12 Days of Dubya’s Christmas.

Looking ahead to the New Year, JibJab takes a look at Dubya's Year In Review in their new cartoon entitled 2-0-5. 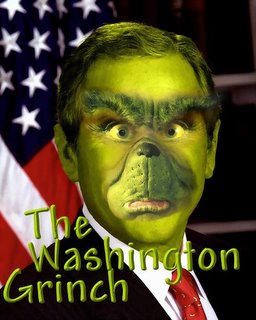 Baby Bush toys, an exciting range of products for the resoundingly average child.

Q: What does Bush Want for Christmas?

A: A new scooter. 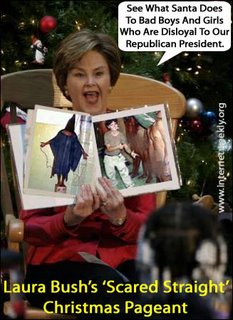 AUSTIN, TX (Dec. 4) - Attorneys for Texas Governor George W. Bush filed suit in federal court today, seeking to prevent Santa Claus from making his list and then checking it twice. The complaint seeks an immediate injunction against the beloved Christmas icon, asking the court to effectively ban his traditional practice of checking the list of good boys and girls one additional time before packing his sleigh.

The suit, filed in the Federal District Court of Austin, Texas, asks a federal judge to "hereby order Mr. Claus to cease and desist all repetitive and duplicative list-checking activity, and certify the original list as submitted, without amendment, alteration, deletion, or other unnecessary modification."

"There are no standards for deciding who is naughty, and who is nice. It's totally arbitrary and capricious. How many more times does he need to check? This checking, checking, and re-checking over and over again must stop now," said former Secretary James Baker.

Gov. Bush cited the potential for unauthorized list tampering, and blasted what he called the "crazy, crazy mess up there at the North Pole."

"Their security is really awful, really bad," said Bush. "My mother just walked right in, told 'em she was Mrs. Claus. They didn't check her ID or nothing."

Meanwhile, Dick Cheney, Gov. Bush's running mate, issued a direct plea to St. Nick himself. "Mr. Claus, I call on you to do the honorable thing, and quit checking your list. The children of the world have had enough. They demand closure now," Cheney said, adding that his granddaughter has already selected a name for the pony she's asked for.

The Rev. Jesse Jackson was quick to respond to this latest development with plans to lead his protesters from Florida to the North Pole via dogsled. The "Million Man Mush" is scheduled to leave Friday. "We need red suits and sleighs, not law suits and delays," Jackson said.

Santa Claus could not be reached for comment, but an spokeself said he was "deeply distressed" by news of the pending legal action against him.

A weary nation can relate. 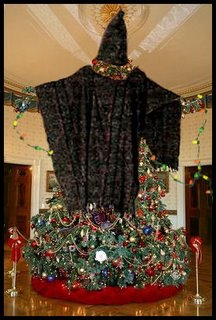 The Supreme Court ruled there cannot be a Nativity scene in Washington, D.C. this Christmas. This isn't for any religious or constitutional reason, they simply have not been able to find three wise men and a virgin in the nation's capitol. There was no problem however finding enough asses to fill the stable.

BUSH ISSUES OFFICIAL LIST OF THINGS TO BE THANKFUL FOR 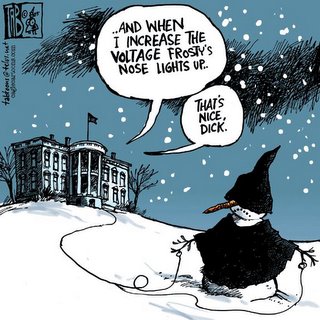 In a special radio address broadcast from the White House, President George W. Bush asked his fellow Americans to join him in giving thanks for the following things: 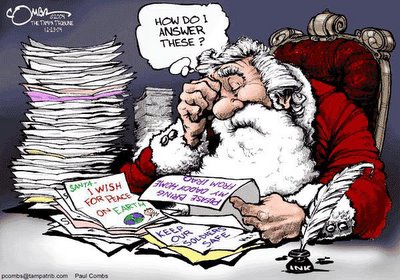 Thought for today: "President Bush's approval rating now down to 35%. To give you an idea about how unpopular President Bush is right now, he wasn't even invited to the White House Christmas party." --Jay Leno

These are funny! I'll be back to go thru some more links ;) thanks!

You are totally my new fav. blog... in fact, I may have to hero worship you just a little bit.

That one pic is an insult to the Grinch.

(New Bush-related rants and cut cat pics up at my place!)

Hey, you have a great blog here! I'm definitely going to bookmark you!
I have a toy pet site.
Come and check it out if you get time :-)
Greetings.