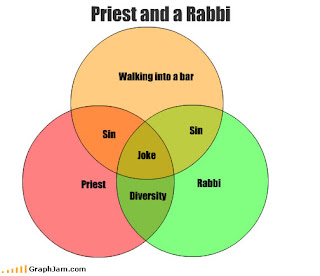 The priest said a blessing over his car -- in Latin.

The rabbi said his own blessing over his own car -- in Hebrew.

The priest went to put some water in the radiator, making it clear his car would benefit from the "holy" water.

The rabbi said nothing, but quietly reached into the trunk of his car, took out a hacksaw, and cut the end off the exhaust pipe.