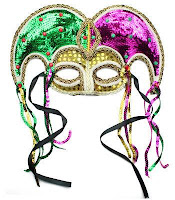 The new Krewe of Chewbacchus puts a little nerd into Mardi Gras. See pictures of how they partied like it was long, long ago and far, far away.

Today is Mardi Gras! Whether you celebrate it as Pancake Day or Carnival, get your gluttony in before Lent starts tomorrow!

Government austerity measures in Greece are so bad that citizens are leaving for Canada or Australia. Emigration is certainly a better solution than suicide.

6 Unlucky Australians Who Couldn’t Catch a Break. Taken together, these stories might make you want to stay out of Oz.

Gerrymandering is when politicians select their voters instead of the other way around. And it still goes on, despite reform measures.

New drug therapies may be able to erase traumatic memories, including those that cause PTSD, drug addiction, and certain mental illnesses. What could possibly go wrong?

The Naked Cowboy is running for president -again. He's one of around 300 candidates who have filed to run, most of whom you've never heard of.

They told young Matthew Grammer he could be anything he wanted to, so he said he wanted to be R2D2. From any other kid, it would be just a cute story, but the Make-A-Wish Foundation made Matthew's dream come true.

This year's Carnival in Rio de Janeiro is the biggest the city has ever seen. And the city was ready ready, with more emergency workers, better communication, and more available toilets than ever before.

Eternal Copyright: a Modest Proposal. Adrian Hon thinks Swiftly about making a good idea even better.
Posted by Miss Cellania at 2/21/2012 05:27:00 AM