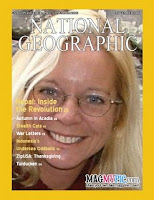 The Man Who Shot John Wilkes Booth. They don't come any crazier than Boston Corbett.

Beautician Debbie Benton was murdered, and there is more than one suspect. She didn’t like her husband’s sex change, and didn’t even leave him enough cash to pay the hit woman.

The problem with outsourcing the military. Overspending, waste, fraud, and security breaches: it’s all about accountability.

Russian scientists have finally broken through to Lake Vostok, after twenty years of drilling through two miles of Antarctic ice. The freshwater lake underneath has not been exposed to the atmosphere for millions of years -and might even contain life.

'Rasputin Was My Neighbor' And Other True Tales Of Time Travel. See an eyewitness to the Lincoln assassination who appeared on television, Civil war widows who saw the 21st century, and the man who met both President John Quincy Adams and President John Kennedy. (via Breakfast Links)

Getting our immune systems to fight cancer was awesome already, and now we've got a special effects video. Watch a killer T-cell attack a cancer cell, slowed down and colored so we can see what happens.

President Kennedy got away with womanizing in the '60s, so why do we discuss the affairs of Herman Caine and Newt Gingrich today? Because character matters to voters, and always has.

If you want to spend $10,000 to propose to your significant other, you can do it at Pizza Hut! No, seriously, they expect up to ten people to spend big bucks to pop the question at a pizza parlor chain.

The Science Fiction Effect. The best science fiction comes from the question: What could possibly go wrong?

6 American Athletes Who Found Stardom Abroad. And you take it where you can find it.

Character matters to voters when it is the other guy. I maintain that if we eliminated all of the people of low character, there would be no one left to run for office. Back in the day, movie actors did the same things actors do today. It just wasn't talked about. Politicians did what they do today. It just wasn't talked about. There the "scandal sheets"in the newsstands, but only a few and not next to every place where the house wife bought here groceries. There weren't 24 hour news channels vying for "news" stories to fill time and to be "first with the latest." Nobody cared that there was a car chase in progress; they were too busy getting their work done.

Now we have to fill time on the air and space in the twenty different expose rags at the end of the aisle next to the check-out line as well as feed the thousands of Huff-post/Drudge "Report" wannabes who need fodder. Yes, character matters, but not half as much as the insatiable need for gossip and the stuff that will kill the other guy's chances at the nomination/election. Gingrich was watching while Obama had an affair with Romney's wife. It doesn't have to be true. It just has to sell. Of course if any part of it turns out to be true (I'm holding out for Gingrich watching) then we can all say we told you so.