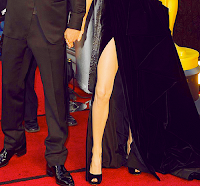 Hollywood’s extensive hype over the Academy Awards presentation is all about publicity. Going into the weekend, many tried to guess what the big story would be. Sasha Baron Cohen’s costume? The best and worst gowns? No, they were all upstaged. Angelina Jolie’s right leg was the star of Oscar night. It so overwhelmed everything else that Jim Rash was inspired to strike the same pose when he accepted his Oscar for Best Adapted Screenplay Oscar for co-writing The Descendants.

So much coverage led to the inevitable “legbombing” challenge.

The winner of such Photoshoppery has to be this one posted at reddit.