9 Pre-Lenten Treats from Around the World 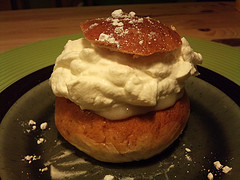 Today is Shrove Tuesday, the last day before Lent in many Christian traditions. Eastern Orthodox Christians begin Great Lent on a slightly different calendar. The day is also called Mardi Gras, Carnival, Pancake Tuesday, and many other names in various languages. What these days have in common is a tradition of a final feast of foods that will be forbidden for the period of Lent which leads up to Easter. Many cultures have developed traditional recipes to use up the household supplies commonly given up for Lent, in order to reduce temptation and waste. That means sugar, eggs, oil, meat, and other calorie-laden staples. See some of these delicious treats in a list I posted at mental_floss.

This looks absolutely delicious. I wish I would have learned about this recipe last week, now I have to wait another 30 or so days to try it :/

This looks absolutely amazing. Hopefully there are some recipes that I can find on the web today.