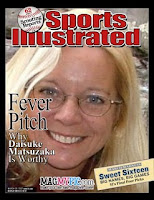 5 Lesser Known and Completely Ridiculous American Civil Wars. "States rights" once meant that Iowa and Missouri would try to settle their tiffs with firearms and farm implements.

The best senior portraits. I hopes these graduates remember the stories behind the pictures when their grandchildren ask. (via Everlasting Blort)

Leave Me is the story of a guy and a digital camera. Yes, it's pretty simple, but you might want to have a hanky ready.

The Haunted Household. Christoph Niemann is bedeviled by mischievous spirits which you have most likely seen in your own home as well. (via Boing Boing)

10 People Who Laughed Themselves to Death.

Police officer Nick Shepherd rescued a dog that was tangled in a fence. What happened afterward is worth worth sitting through the jumpy footage from Shepherd's automatic camera.