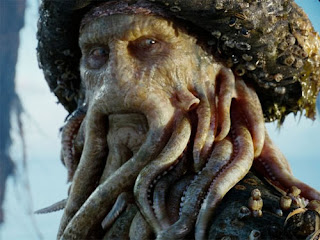 No matter how well modern filmmakers can create characters with no human attributes, we still find it easier to communicate with and relate to humanoid forms. What’s the simplest way to take a humanoid fictional character and make it different, frightening, and maybe even disgusting? Put some tentacles on it! On the surface, tentacles evoke a mental image of the octopus, a strange and mysterious creature of the deep we never encounter in everyday life. Its tentacles are far-reaching, flexible, and numerous -attributes that can each be threatening. On a deeper psychological plane, tentacles remind us of snakes and the near-universal fear they inspire. Extending on that association, Freud would say the snake is a metaphor for the penis. Let’s look at some pop culture characters presented as different, frightening, or disgusting through the appearance of tentacles, in this article I wrote for mental_floss.
Posted by Miss Cellania at 6/15/2010 09:56:00 AM