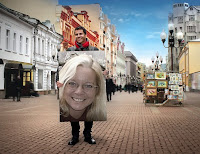 Fathers Day Gift Suggestions from The Art of Manliness. Because even men with simple tastes should get the best every now and then. (via Holy Kaw!)

Hard Candy Jewels: the recipe and step-by-step illustrated instructions, and also warnings about what could go wrong and why. (via Evil Mad Scientist Laboratories)

Mathematician Skip Garibaldi worked out the most geometric layouts that will accommodate more stars if the US flag has to be updated when more states join the union. Slate posted a calculator in which you can enter a number of states, from one to a hundred, and see the best star patterns according to a Garibaldi's computer program.

Wildlife experts use perfume to attract jungle animals to camera traps so they can be photographed and identified. The most successful scent for animal attraction is Obsession For Men. (via Everlasting Blort)

If real-life high school students did what the kids on the TV show Glee do, they could be liable for millions of dollars in fines. But the show will not address the issue at all. (via Boing Boing)

North Koreans temporarily in China give us a glimpse of what life is like in their homeland. It's not pretty, and it may get worse before it gets better.

From the highest mountain to the deepest ocean trench. Everywhere in between, there's something amazing about our planet. (via Gorilla Mask)