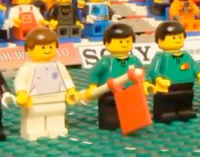 See both highlights of the US-England World Cup game rendered in Lego. This includes instant replays.

The 10 Funniest Movie Credits Of All Time. Admit it, there have been times when you got up and left a movie theater as the credit started, and days later someone told you the credit roll was the funniest part of the film.

The Most Common Uses of Irony. A title guaranteed to bring out those who know what irony actually is better than the next person. (via Gorilla Mask)

Amputee Rap. Champion skier Josh Sundquist busts some rhymes about his handy crutches, his expensive prosthesis, and his socks that don't have to match.

"End Love" is the new single from OK Go. Of course, the video is something everyone must see at least once.

This is either a model of gravitational orbs, or an idiot attractor. Here are some wild guesses as to how we should play with it.

I still think the closing credits for "Being There" are the best of all time.....but I'm an old fart.