Links for Fun and Entertainment 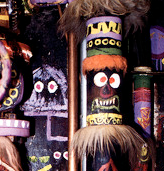 To fill time while they waited for an appearance on The Jack Paar Program in 1964, Jim Henson, Frank Oz, Don Sahlin, and Jerry Juhl decorated some pipes in their dressing room. They left a note that said, "With love, from the Muppets." The pipes remained as they were for 46 years. (via Metafilter)

Oxygen tries to make friend with the other elements, with varying results.

My new favorite blog today is Weirdo Toys, where you can find oddities like the Super-Spider-Man! Behold his hollow arms, his wandering eyes, and his superhero identity crisis. (via Evil Mad Scientist Laboratories)

You Became A Meme. Taylor Swift found out that once you've gone viral, your life is never the same.

The 6 Most Hilarious Undercover Operations Ever Pulled Off.

How does a true geek express his love? With a song about comic books, video games, or alternate-reality avatars, or course!