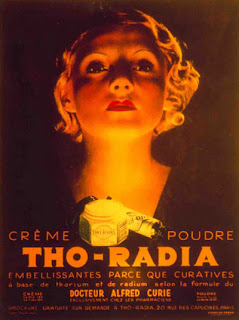 Radiation as a medical cure has valid uses and definite dangers to the human body. We use radiation for diagnosis (as in x-rays) and for therapy (as in cancer treatment), but the benefits must be carefully weighed against the costs. Once upon a time, radiation in different forms was new and wondrous and had a million uses -medications, cosmetics, industrial applications, and even entertainment. It was only later that the danger became evident. Read about these uses in this article I wrote for mental_floss.
Posted by Miss Cellania at 6/08/2010 09:32:00 AM