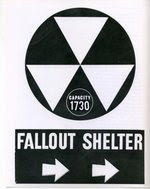 The Complete History of the Fallout Shelter Sign. Those of us who grew up during the Cold War knew what this symbol meant, and we knew we might need that shelter at any time. (via Everlasting Blort)

Building my father's coffin. His last request made no practical sense, but it brought the family together and gave them lasting memories.﻿

An hour-long video interview with Ingmar Bergman. Subtitled in English for your convenience.

Once Upon a Time in Afghanistan, women weren't only educated, they even attended college beside men. Now, just building an elementary school is a heartbreakingly difficult task.

We love Who They Aren’t: 7 Famous Impostors looks at cases of impersonation that made big headlines, and sometimes became Hollywood fodder.

Cracked continues its mission to make history more interesting than Hollywood with 5 True War Stories That Put Every Action Movie to Shame. These stories would have been movies, if they were a bit more believable.

A new theory states that damage to to vagus nerve might be behind the fact that bulimia is so hard to cure in some patients. This might lead to new drug treatments or new ways of disrupting binge and purge cycles.
Posted by Miss Cellania at 6/07/2010 06:01:00 AM