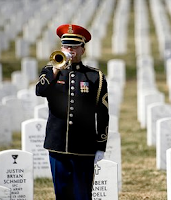 The bugle call "Taps" is used at military funerals and memorial services as well as for lights out. Where did this song originate, and why does it affect us so?

How to Remember Soldiers on Memorial Day.

The Top Ten New Species of the Year includes a worm that can throw its gills away, a carnivorous sponge, and a mushroom that has already been a topic on a game show. Then there are some weird ones. (via Metafilter)

You'll understand a fairly new psychosis just by its name: The Truman Show delusion. Is this just a kind of paranoia, or is it sparked by the technology of our modern lives? (via Jason Kottke)

All The Dirt That's Fit To Print. How The National Enquirer came to rule the supermarket checkouts and even applied for a Pulitzer Prize this year. (via Metafilter)

Good: surfing the web tends to increase one's brain activity. Bad: it may hurt your comprehension, concentration, and memory.

How The U.S. Government Killed The Safest Car Ever Built. Was it an idea that was destined to fail, just hard to sell, or a a case of destroying "the evidence that you could do much better"?

Adam Savage explains the myth that Mystbusters busted, but will never be aired on TV. The results might give sponsors and children nightmares.
Posted by Miss Cellania at 5/31/2010 05:58:00 AM