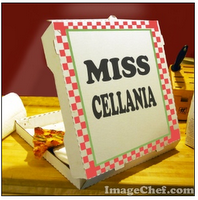 5 Trends You Think Are Ruining Movies (Are Older Than Film). Oh, they’re still being ruined, but the methods are nothing new.

Royal Wedding unites the world in mathematical lunacy. Or, more likely, the media likes to hype a story and exaggerate the numbers.

Joe the paraplegic bunny rabbit got around by dragging his hindquarters behind him, until Liam designed him some wheels. Now Joe is an all-terrain bunny!

Florida takes the title of America’s Weirdest State. The evidence is overwhelming and strangely entertaining.

A kaleidoscope of pizza costumes. (via Gorilla Mask)

Sarah Hubbard was taken with the Pop Tart Nyan Cat just like the rest of us. She got out her violin and her cat ears and recreated the meme in real life.

The Intergroom’s Creative Challenge competition for dogs is not really a beauty contest, but more like using a dog as an artist’s canvas. Those poor, pitiful, patient dogs. (via Nag on the Lake)