The Lion of Gripsholm Castle 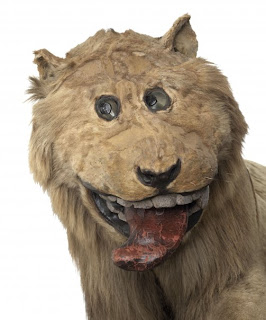 King Frederik I of Sweden was given gifts from the Bey of Algiers in 1731. These included a lion, another wildcat, three hyenas, and a freed slave who became the animals’ keeper. The creatures lived out their lives at Djurgården, the Royal Game Park. Quite a few years after the lion died, some of its remains were sent to a taxidermist to be mounted. All that was left was the pelt and some bones. The taxidermist was not at all familiar with this animal called a lion. So he did the best he could with what he had. There’s always the possibility that alcohol was involved. The lion became a Swedish and then a global meme, as you'll see in this article I posted at mental_floss.﻿