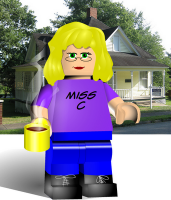 What is Beneath the Temple Mount? An archaeologist shares the wonder of digging under the crossroad of three world religions.

Rick Hill went on a Hawaiian vacation and met a resident named Joe Parker. A joke about their similar accents led them to discover they are half-brothers, separated by a few decades and a continent. (via Metafilter)

Using common sense isn’t always the best decision-making strategy. That “common sense” may not be universal, and it always colored by your unique experiences. (via Lifehacker)

The Worst Case of Mistaken Identity. It’s just a pebble, take it, she said as she gave away a 21-carat diamond in the rough.

A real sign of economic trouble: It's getting harder to extract money from the poor, because they don't have any.

You Know It's Good When the Boys Want In.

Why it’s good to be a high school loser. Not only does it get better, but freaks, geeks, and bully-bait turn out to be the folks who run the world.

The 6 Most Terrifying Historical Car Races. The concept of safety and survivability came very gradually to the sport of auto racing.

The lengths to which authors will go to get publicity for their books. (NYT link) “Self marketing” takes many forms, from bribery to deception to embarrassment. (via Boing Boing)