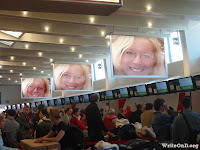 The Secret Fears of the Super-Rich. Having money often undermines everything else worth having in life.

In honor of Pixar’s 25th anniversary, here is a video montage of twelve feature films and 20 short subjects you know and love. Which part made you finally tear up?

Jeff Martin produced the largest indoor photograph ever: a 40-gigapixel, 360-degree image of the main hall of the 868-year-old Strahov monastery library in Prague, Czech Republic. Almost 3,000 images were shot over five days and then stitched together to make the mega-picture. (via The Daily What)

Geophagy: Not Your Average Eating Disorder. As anyone with a crossword puzzle Latin education can tell, this means eating dirt.

Ottawa artist Dan Austin makes awesome robots out of old appliances and other recycled bits of this and that.

One hundred and fifty years ago this month, the first shots were fired in the U.S. Civil War. How much do you know about what really happened that day at Fort Sumter, South Carolina?

How a differential gear works. Explained in small words and lots of visual analogies, just the way I like it.

Get your Country out of my Happy Meal!: Liberty cabbage, Freedom fries and other Product Renamings. Some of the strangest food terms we use came about for political reasons.

The History of Dairy Products (is spelled g-o-a-t).

Wisconsin Congressman Sean Duffy said he was struggling to pay his bills on only $174,000 a year. The GOP wants all copies of the video pulled from the internet. Maybe we can help.
Posted by Miss Cellania at 4/04/2011 05:12:00 AM