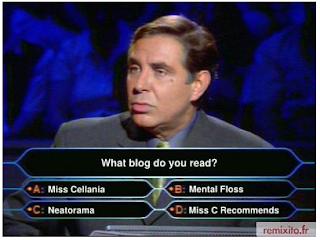 Today is National High Five Day! Do you know how the High Five came about?

Weird Al Yankovic released his parody song “Perform This Way” free online. It was supposed to be on his next album, but Lady Gaga declined to approve it.

What Lies Behind the Grand Canyon?

Artist John Martz brings us Trexels, a poster featuring 235 characters from the Star Trek universe in pixel form, all in one artwork. How many can you name? (via Boing Boing)

7 Memes That Went Viral Before The Internet Existed.

5 Middle School Magazines. I have three middle school students, so I found this to be spot-on. (via Buzzfeed)

Rob Cockerham knew that the Post Office would be a madhouse on the evening of tax deadline day, so he set up shop scalping postage stamps. It was a fine experiment, but next year he’s going to sell champagne instead. (via Boing Boing)

How difficult would it be to get a cat to climb into a bowl? This Japanese TV show wanted the answer, and used many cats and bowls to get the definitive answer.

Symmetry means more than being equal or even complementary. Sometimes imperfect matches are the most thought-provoking.

10 Foreign McDonald’s That Aren’t Exactly McDonald’s. These are just far enough off to be unofficial and completely funny.
Posted by Miss Cellania at 4/21/2011 05:13:00 AM