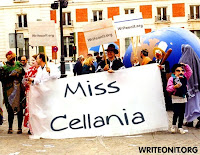 5 Wacky Internet Pranks That Can Get You Jail Time. Make your plans accordingly.

50 easy April Fool’s Day pranks to play on your friends.

8 Sports-Related April Fools’ Day Hoaxes. This will sort of counterbalance the science hoaxes at the top of this list.

A New Company Promises to Give You a Pretend Facebook Girlfriend. If you want people to think you have a relationship, Cloud Girlfriend can set you up, which, of course, will attract the kind of women who want what some other woman has.

A cobra escaped from the Bronx Zoo. It’s been spotted in the strangest place: on Twitter.

What Monty Python Can Teach Us About Saving Money. Nonsensical comedy leads to commonsense advice, along with links to the original skits.

The guys at College Humor figured out what those twin boys were talking about, and gave us handy subtitles. They haven’t yet learned to avoid political discussions in the family.
Posted by Miss Cellania at 4/01/2011 06:12:00 AM