James Spring wanted to help someone in some way to celebrate his 40th birthday. He read about a case of a couple wanted for murder who may have gone to Baja, Mexico, an area he was intimately familiar with. The couple had their two children with them, although they did not have legal custody of six-year-old Viana.

"I took off Sunday morning," Spring said. "I found them in a day and a half."

After contacting US Marshalls, it took some time to arrange the paperwork to have the couple arrested and brought back to the US. Mexican police raided the family’s house late Monday afternoon, and Viana and her infant sister were delivered to their grandparents in San Jose on Tuesday night. The parents, Richard Carelli and Michelle Pinkerton are accused of murdering a roommate and leaving his decomposing body in their van. 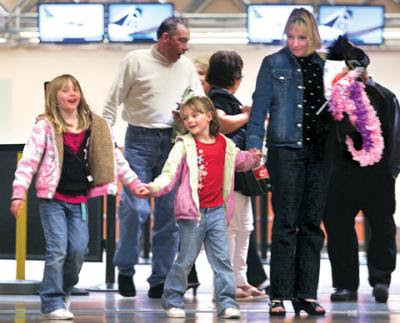 Viana with her grandmother and cousin upon reunion.


Spring said he's accomplished what he set out to do and has no plans to meet the girls' relatives in Soquel or produce a first-person account of his adventure. He turns 40 on April 29.