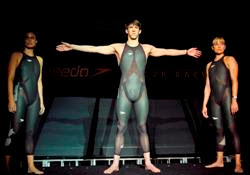 The new hi-tech racing swimsuits aren’t what you’d call attractive, but they are helping swimmers set records. The LZR Racer was developed with help from NASA.

The Incredible Power of Contentment. Happiness should not be a goal to work toward, but an everyday habit.

The contagion of banality. Another reason Wal*Mart is killing us.

9 things to stop worrying about right now. Because, you know, worrying will make your hair turn gray. (via the Presurfer)

In Web World of 24/7 Stress, Writers Blog Till They Drop. It’s strange to see my life described so well in the New York Times.

The origin of the Olympic torch relay. It’s neither as old nor as benign as you might have thought.

The Nova special The Elegant Universe explains why string theory might hold the key to unifying the four forces of nature. The three hours of video is broken down into 4-10 minute segments linked on one page. (via Dark Roasted Blend)

6 Quirks of Ownership: How Possessions Bend Our Perceptions.
People who want to sell something tend to set the price far above what others think it’s worth. That’s human nature, but it isn’t just greed.

A new study shows taking financial risks stimulates the same areas of the brain that sex does. That explains Las Vegas once and for all.
Posted by Miss Cellania at 4/08/2008 09:08:00 AM