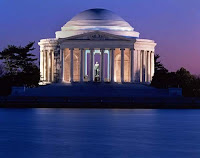 A D.C. woman was arrested over the weekend when she and a group of about 20 gathered at midnight for a sort of silent dancing iPod flash mob at the Thomas Jefferson Memorial to celebrate the birthday of their favorite founding father. When U.S. Park Police told her to leave, she asked what she was doing wrong. They arrested her. With video.