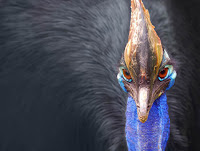 Don’t try to make friends with a Cassowary! The Guinness Book of World Records named it the world’s most dangerous bird. They can break your bones with a swift kick or slice you open with their claws. And they have bad tempers. Zookeepers who take care of the endangered species are in danger themselves from the threat of job-related injuries. (via Dark Roasted Blend)

8 pointless Laws All Comic Book Movies Must Follow. With millions of dollars on the line, Hollywood isn’t about the take any chances.

The Museum of Unworkable Devices is one of those sites everyone on the Internet should know about. There’s a special emphasis on the Holy Grail of engineering, the perpetual motion machine. (via the Presurfer)

When you plan your summer vacation, you might want to check out 18 Of The Best Places To Swim With Sharks. That is, if you’re into that sort of thing.

Watch a kitten chorus line. The ten of them will be ready for Broadway with a little practice.

Never microwave an egg in its shell. Here’s why.

Infographics about a tree. Some are rude, all are funny! (via Grow-A-Brain)

The 10 Most Baffling Computer Gadgets Money Can Buy.

8 Fictional Cities You Wouldn't Want to Live in. In this case, fiction is stranger than truth.