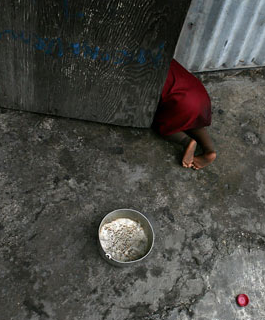 Emerging economies, the price of fuel transport, and diversion of crops to make biofuel has spawned the highest global food prices since the Nixon administration, according to an article in the New York Times. Haiti is especially hard hit.

Haiti’s hunger, that burn in the belly that so many here feel, has become fiercer than ever in recent days as global food prices spiral out of reach, spiking as much as 45 percent since the end of 2006 and turning Haitian staples like beans, corn and rice into closely guarded treasures.

Meanwhile, most of the poorest of the poor suffer silently, too weak for activism or too busy raising the next generation of hungry. In the sprawling slum of Haiti’s Cité Soleil, Placide Simone, 29, offered one of her five offspring to a stranger. “Take one,” she said, cradling a listless baby and motioning toward four rail-thin toddlers, none of whom had eaten that day. “You pick. Just feed them.”
Posted by Miss Cellania at 4/18/2008 01:02:00 PM