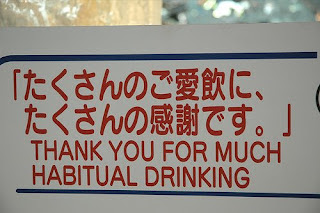 Translating important information into English is not easy. Especially when no one involved is the least bit fluent in English.

WhizBiz. This ad is too funny!

Geology has a lot of fun and colorful jargon. Some think the terms should be trimmed back, but one Scienceblogger wants to add more poetic terms.

Caught in bed. Read the comments, too. (via Zube Girl)

The Cleveland Indians found the playing field covered with snow on opening day 2007. Grounds crews went to work, and so did Dale Omori with the Cleveland Plain Dealer, who took this time-lapse video. (via Metafilter)

The best name for anyone ever.

OMG Lists details 7 Weird Superheros Who Won't Ever Hit the Silver Screen (But Should). Would you believe Arm-Fall-Off-Boy, whose superpower is that he can pull one arm off withthe other? Or the Chlorophyll Kid, who can stimulate plants to grow fast?

Here’s another weird one. A Night of Crime Fighting With ¡¡¡Tu Pacana Virica!!!

Personal Soundtrack Shirt. Because you need Yakety Sax available when a mugger is chasing you.
Posted by Miss Cellania at 4/05/2008 09:01:00 PM