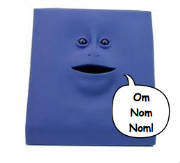 The Face Bank will eat your coins!

There is not enough cussing at YesButNoButYes. You can help.

A cat enjoying a lollipop. Just because.

Burglar caught on camera stealing the first thing he sees.

The 7 Greatest Home Shopping Screw Ups of All Time. See classic videos of what can go wrong on live TV.

There was once a time (and I’m old enough to remember it) when such things weren’t talked about. See 10 Great Tampon Ads From Around the World.

Baracky: Barack Obama stars as a boxer who battles his way to the big time. Hillary Clinton and other big names co-star.

A lion can’t even read his newspaper in peace without a ferret pestering him!