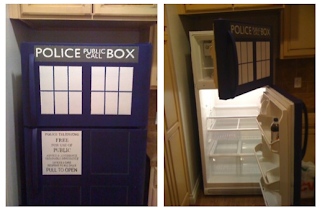 TARDIS is an acronym for Time And Relative Dimension In Space. In the Doctor Who universe, they are vehicles for Time Lords to travel through time and space. Besides its function, the most striking feature of a TARDIS is the fact that it is bigger on the inside, because the door is “a dimensional gateway to a micro-universe.” Most such vehicles change their appearance to blend in with the location and era to which they travel, but the somewhat obsolete model the Doctor uses is stuck in the form of a British police call box. Therefore it has become an icon for Doctor Who fans. And there are many Doctor Who fans who want a TARDIS that works, even if they have to make their own. See eleven such functional TARDISes in this list I posted at mental_floss.