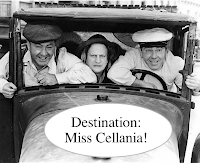 Summer Solstice Celebrations. What are you going to do to mark this first day of summer?

I’m Such A Nerd (with Katrina Bowden). Yeah, every boy nerd wants to find a nerdy girl until she reminds him exactly why nerds are hard to deal with.

International road signs explained. Looks like we’re only getting part of the picture. (via Breakfast Links)

How to make a Spam sandwich Japanese-style. I wonder if they’d taste the same without the yelling?

Extreme Game Show Eliminations. Japanese game shows are different because 1. focus on entertainment more than victory, and 2. there is a real danger of injury or extreme embarrassment.

Let Jell-O help use up your leftovers. (via Boing Boing)

Best headline of the entire sordid saga. (via reddit)

A parade through Belgium raises more questions than it answers. At least I think we’ve found the origin of the goose step.