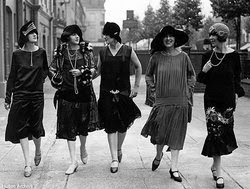 A new book called Singled Out: How Two Million Women Survived Without Men After The First World War by Virginia Nicholson tells how The Great War affected the women of an entire generation.

One hazy morning in 1917 the senior mistress of Bournemouth High School For Girls stood up in front of the assembled sixth form and announced to her hushed audience: "I have come to tell you a terrible fact.

"Only one out of ten of you girls can ever hope to marry. This is not a guess of mine. It is a statistical fact.

"Nearly all the men who might have married you have been killed. You will have to make your way in the world as best you can.

Sitting in the assembly hall among her shocked and silent schoolfellows was 17-year-old Rosamund Essex.

She was never to forget those chilling words, recalling: "It was one of the most fateful statements of my life."

When Rosamund, who never married, wrote her memoirs 60 years later she accepted that her teacher's pronouncement had been prophetic.

"How right she was," she recalled. "Only one out of every ten of my friends has ever married."

Read more about Rosamund Essex and other stories of women whose lives were changed by demographics in this article at The Daily Mail. (via Look at This)
Posted by Miss Cellania at 10/03/2007 09:11:00 AM