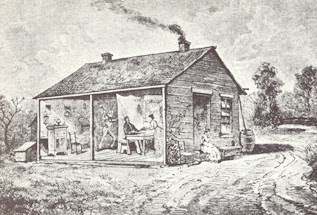 The Benders of Kansas were America’s first serial killers. They ran an inn in their tiny prairie home. The main draw was thier daughter Kate, who was not only attractive, but supposedly a psychic medium.

If a diner, overnight guest or séance participant appeared to be wealthy, he was given a seat of honor with his back to the curtain. While Kate distracted him, Old Man Bender or his son would sneak up to the curtain with a sledgehammer. They would then strike a savage blow to the top of the man’s head, killing him instantly. The body was then dragged back beneath the canvas and stripped. A trap door that led to an earthen cellar was opened and the body was dumped below until it could be buried somewhere on the prairie. A favorite burying ground was apparently an orchard that was located on the property.

Labels: biography of the day, scary