The Sad Story of the Singing Nun 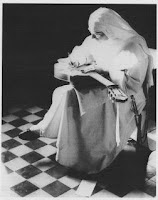 Jeanne Deckers was best known as The Singing Nun, who had a #1 hit in 1962 titled Dominique. What happened afterward is the sad part.

She didn’t seek the fame the music business brought her. Her political beliefs caused a rift between Deckers and her superiors. She left the convent and tried to raise money by resurrecting her musical career, but never quite made it back. Later, she received an income tax bill for her profits from Dominique, years after all proceeds had been donated to the church. Her decline into poverty and substance abuse led to a double suicide in 1985. Read the whole story. (via Metafilter)
Posted by Miss Cellania at 10/05/2007 11:19:00 AM