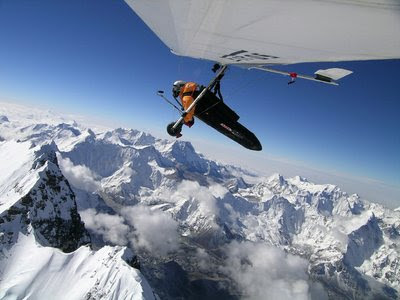 Think climbing Mount Everest is an adventure? It is! But on May 24, 2004, Angelo D'Arrigo surprised a group of climbers on Everest by flying overhead in a hang glider!

His adventure was filmed in the documentary “Flying Over Everest” in which D'Arrigo chronicles a key moment: "South of Everest and close to the peak, we ran into a gigantic area of rotor turbulence, which dragged the microlight violently downwards, projecting me in the hang glider upwards at the same time". However, the turbulence stopped and D'Arrigo was able to fly on over the mountains: "We were at a height of about 9000 meters; I was 500 meters south of Everest, about 150 meters over the peak... This was the moment, flying over Everest! I had succeeded in the attempt to fly my hang glider over the highest mountain in the world."