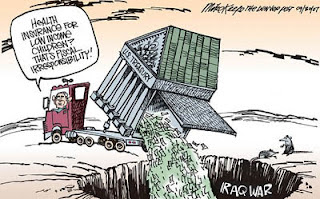 Frontier Former Editor puts his feelings about Iraq into a few choice words.

What happens when you get rid of all the illegal immigrants. Some towns are rethinking their recently-enacted hard-line laws.

Economic priorities of the federal government.

Have you heard of Free Speech TV? Find out more at Simply Left Behind.

I always hated it when Ann Coulter was attacked for her looks. That’s so unneccessary. There are plenty of other reasons to attack her, like the things she says. There are too many jokes about her looking like a man, so she has to go and say things that proves she hates being a woman.

Iceland had exactly one troop in Iraq. But now he’s going home, and leaves us a farewell song. The Loneliest Icelander.