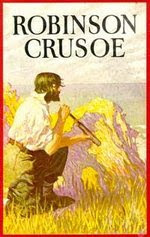 In 1704, Alexander Selkirk was left on a small island hundreds of miles off the coast of South America when he argued with his ship’s captain about the seaworthiness of the ship. He was right about the ship, but Selkirk spent four years and four months on the island, eating goats and plums and making friends with feral cats.

[Selkirk] was at first much pestered with cats and rats that bred in great numbers from some of each species which had got ashore from ships that put in there for wood and water. The rats gnawed his feet and clothes whilst asleep, which obliged him to cherish the cats with his goats' flesh, by which so many of them became so tame, that they would lie about in hundreds, and soon delivered him from the rats. He likewise tamed some kids; to divert himself, would now and then sing and dance with them and his cats; so that by the favor of providence, and the vigor of his youth, being now but thirty years old, he came, at last, to conquer all the inconveniences of his solitude, and to be very easy.

Read the story of the man who inspired Daniel Defoe to write Robinson Crusoe at Damn Interesting.
Posted by Miss Cellania at 10/22/2007 10:10:00 AM