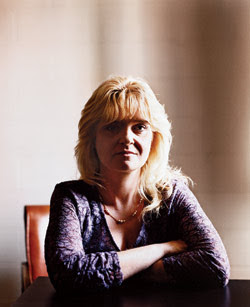 Amateur counterterrorist Shannen Rossmiller works from her office in Montana. She is monitoring terrorist sites, forums, and chatrooms on the internet.

We're monitoring jihadist chatter, and she has warned me that we're not likely to come across anything too dangerous. Home-brew cyber-counterterrorism, it turns out, is a lot like most police work — weeks of tedious beat patrols punctuated by occasional bursts of excitement. And the section of the Internet populated by terrorists is a lot like the rest of the Internet — only instead of commenting on, say, a video of 1,500 prison inmates performing Michael Jackson's "Thriller," everyone's chatting about the death of Americans.

The 38-year-old Rossmiller gets up at 4AM to check the ‘net before her day job in the attorney general’s office. She surfs at night and on weekends.

She has passed along numerous case files to federal authorities. Her information has led US forces abroad to locate Taliban cells in Afghanistan, discover a renegade stinger-missile merchant in Pakistan, and help another foreign government identify a ring of potential suicide bombers.