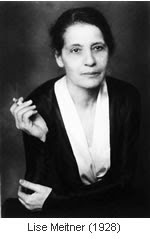 How did a Jewish woman born in Germany in 1878 end up as a nuclear scientist? Lise Meitner discovered nuclear fission! At first she received no credit for the discovery because of who she was. Then she received “the blame”.

The Nazis, in the meantime, had been removing all traces of the Jews, and Meitner’s name was erased from all the research she had done. Perhaps because of this, Otto Hahn managed to convince himself–and the world–that the discovery of nuclear fission (Meitner coined the term) had been his. Hahn received the Nobel Prize in 1944. (Meitner never did.) For years, Hahn was listed at the inventor, with Lise Meitner occasionally mentioned as his assistant.

When the atom bomb was dropped on Japan, Meitner was upset, not only by the devastation but also by the sudden publicity: reporters on her doorstep; cameras in her face; phone messages and telegrams waiting for her reply. She had little to say. The bomb had killed 100,000 people, and suddenly she was being portrayed in the media as the person who had come up with the blueprint for it.