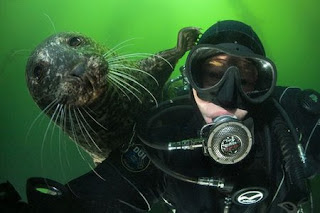 His love of the ocean and its inhabitants are well described in this article at SF Gate.

Chetron was a man who lived in two worlds. In one, he was a big-league software engineer in Silicon Valley. He had a degree from Harvard, a master's from Stanford. His friends all said he was the most intelligent person they knew.

In his other world, he lived to dive in the cold waters on the edge of the continent, the world just under the surface of the Pacific. It was the place he loved best.

He came back from the depths with photographs of sea life -- animals, plants in purple, orange and pastel colors, pictures of tiny sea creatures, a shot of a rock cod waiting to pounce on a prey, pictures of a place that looked like another world, just below the surface, just beyond the shoreline. His favorite was a self-portrait with a harbor seal looking over his shoulder.

Chetron enjoyed just a few years of diving photography. From his site:

On Saturday, March 17, 2007 Kawika launched his boat in Eureka, California. When he did not return that evening, the Coast Guard launched a search, finding his boat Sunday morning. Kawika's camera was on board; Kawika and his dive gear were not. The Coast Guard continued the search until Monday evening. He has not been found.

But he leaves amazing images behind. Take a look at his gallery.