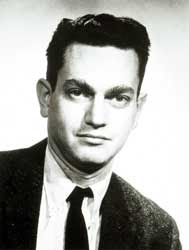 People still think Watson and Crick are the ones who “broke the genetic code.” No, they discovered the double helix... from an x-ray taken by Rosalind Franklin. People forget, or never knew, that Marshall W. Nirenburg was the one who figured out the sequence of amino acids that program a living being.

In 1961 Marshall Nirenberg, a young biochemist at the National Institute of Arthritic and Metabolic Diseases, discovered the first "triplet"—a sequence of three bases of DNA that codes for one of the twenty amino acids that serve as the building blocks of proteins. Subsequently, within five years, the entire genetic code was deciphered.

So why doesn’t everyone know the name Niremburg?

“Personality, I guess,” Nirenberg says. “I’m shy, retiring. I like to work, and I’ve never gone out of my way to try to publicize myself. Crick told me I was stupid because I never was after the limelight.” In addition, Watson and Crick’s discovery yielded a simple, visually stunning image: a gleaming molecular spiral staircase. The genetic code, in contrast, was a mazeworks of forbidding chemical names, codons and complex molecular functions—a publicist’s nightmare.

Nirenberg, 80, is now a laboratory chief at the National Institutes of Health, where he has spent his entire career. His otherwise standard-issue science office is distinguished by framed copies of his lab notebooks tabulating the results of his genetic code work. Many of the original documents and some of the instruments he used in this research are on display on the first floor of the NIH Clinical Center, in the exhibit “Breaking the Genetic Code.”