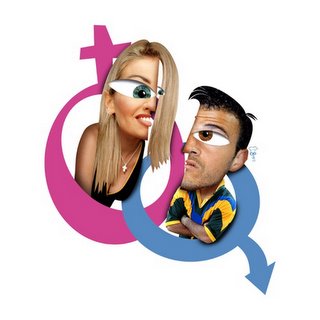 Gender differences have always fascinated me. How about you? I've collected a lot of funnies about the subject, so here's another chapter in a recurring series. Now, before you read the rest of this, remember I LOVE men, and I AM a woman. Generalizations are only intended for humor, we all know there are way more difference among men and women than there between men and women. So take these as they are intended, just plain fun. And leave a comment!

Did you know?
EVERYTHING HAS A GENDER
You may not know this but many nonliving things have a gender.

1) Ziploc Bags are Male, because they hold everything in, but you can see right through them.

2) Copiers are Female, because once turned off; it takes a while to warm them up again. It's an effective reproductive device if the right buttons are pushed, but can wreak havoc if the wrong buttons are pushed.

3) A Tire is Male, because it goes bald and it's often over-inflated.

4) A Hot Air Balloon is Male, because, to get it to go anywhere, you have to light a fire under it, and of course, there's the hot air part.

5) Sponges are Female, because they're soft, squeezable and retain water.

6) A Web Page is Female, because it's always getting hit on.

7) A Subway is Male, because it uses the same old lines to pick people up.

8) An Hourglass is Female, because over time, the weight shifts to the bottom.

9) A Hammer is Male, because it hasn't changed much over the last 5,000 years, but it's handy to have around.

10) A Remote Control is Female. Ha! You thought it'd be male , didn't you? But consider this - it gives a man pleasure, he'd be lost without it, and while he doesn't always know the right buttons to push, he keeps trying!


AND THEN THERE IS THE COMPUTER

Recently, a group of computer scientists (all males) announced that computers should also be referred to as being female. Their reasons for drawing this conclusion follow:

Reasons to believe computers are female: 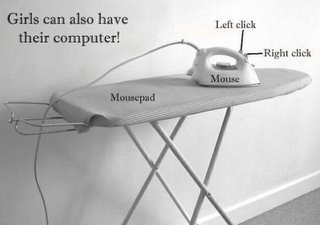 However, another group of computer scientists (all female) think that computers should be referred to as if they were male. Their reasons follow:

Reasons to believe computers are male:

Karla has an additional one-liner on the above.

A VIEW FROM THE OTHER SIDE

FTS on, hmm.. not exactly semantics, but word usage: Quantity vs. quality.

A husband read an article to his wife about how many words women use a day... 30,000 to a man's 15,000. The wife replied, "The reason has to be because we have to repeat everything to men."
The husband then turned to his wife and asked, "What?" 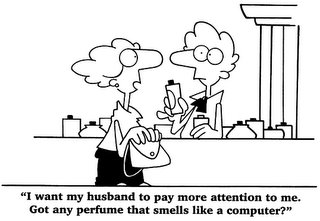 *LOL* I love the mouse! Do they have a male version with a potbelly?

These are all pretty funny (just like ALL of your posts). But, I do see a little sexual bias on these particular ones. Or maybe it's just because "I hold everything in, and you can see right through me!" ~ jb///

's OK, JB. You have to remember, I don't write the biggest part of these jokes... none of them today. I just MC them!

Thank You for stopping by I am honored.
I read your blog every morning. It makes my day. It is the first thing I do when getting out of bed. Well almost got to have the COFFEE first

Where in the world do you find the time to find all this stuff? This was very funny...all of it!

I'm sorry.. you were saying something...?