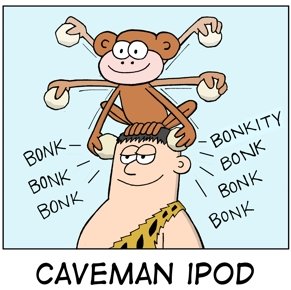 You often hear people talk about how complicated life is these days, and how things were much simpler in the past. Probably they are talking about their own youth, when everyone's life was simpler. Maybe we should take a trip WAY back, to a time when life was simple. No commuting, no computing, no neckties, no punching a timecard, no taxes. Sound good? All you had to do was kill a mammoth every month or so, eat as much of it as you could before the flesh spoiled, and avoid becoming dinner for a sabre-toothed tiger. And invent fire. Things weren't so easy for cavewomen, either. They had to put up with those Neanderthals!

The humor formula in prehistoric times.

How cavemen learned to impress women.

An ad from Vonage explains how cavemen invented communication. 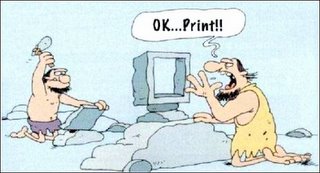 Discover the upscale side of prehistoric living with a stay in The Caveman Room at the Madonna Inn in San Luis Obispo, CA. Room service available.

Dribbleglass has a short course on prehistoric man with a lot of humor mixed in.

Just like Dribbleglass, I was looking for an excuse to use the words "Homo Erectus" in this post, and came across this book named Homo Erectus about men and women. Sounds pretty good to me, I may have to read it. And you can be sure it would be referenced in the Mars and Venus series.

What kind of prehistoric creature are you? Take the caveman test and find out! Here's my result:

How much do you know about prehistoric hominids? Take the Caveman Challenge!

If you really want to learn more about caves, take the virtual cave tour. 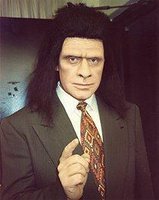 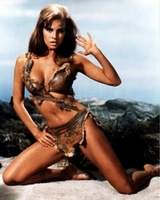 5. Loana (One Million years BC) 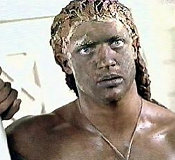 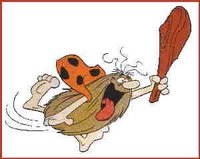 Brad the caveman was wandering around the steamy jungle when he was attacked by a sabertooth tiger.

During the tussle they both fell into a hole dug by Brad's tribe, who were the first ever humans to try this method of catching animals for food. The tribe hearing the noise of the fight raced to the hole, which they called 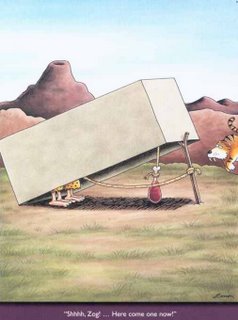 a Pit and were joined by another tribe, who were still using the throw-stones at the animal method.

The Headman from this latter tribe couldn't work out what was going on and looking down thought that Brad must be a new type of man. The Headman grunted "nggh mfguk wolhj" (or "What him be?").

At that moment Brad got the upper hand on the largest member of the cat family and lifting the big pussy up flung it out of the pit.

The Headman of Brad's tribe arrived and asked what had happened to which one of his tribe pointed at the hole and said "Pit!" and then pointing at Brad said "He can throw pus." and points at the tiger lying stunned by the side of the hole.

The first Headman believing this to be the answer to his question walked away knowing that Brad was the first Pithecanthropus. 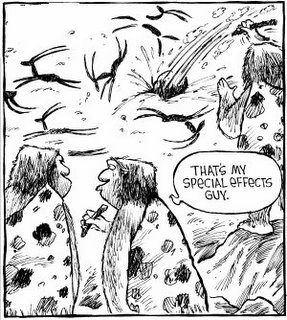 When I was a kid my favorite relative was Uncle Caveman. After school we'd all go play in his cave, and every once in a while he would eat one of us. It wasn't until later that I found out that Uncle Caveman was a bear. -Jack Handey

If I were a caveman, I'd find someone's drinking coconut and poke a hole in the side of it -- instant dribble glass! I could also use a saber-tooth tiger bladder to make a whoopee cushion, but something tells me that cave folks weren't very sheepish about passing gas, so the joke might be lost on them. -Donald Junter

Thought for today: The 21st century really doesn’t look so bad after all.

We men still have our caves we crawl into occassionally; they're just in our heads now. ;)

Funny stuff! Well except for Rachel Welch! There's nothing funny about her! (Man those were the DAYS!) You know when just men had tattoos. Life was so much simpler then! ~ jb///

Me like cavemen. Me want be caveman. Wear fur. Drag woman to cave. Make ungabunga. Have meat burned over atra...

...unfortunately, I have this day job and college tuition to think about paying.