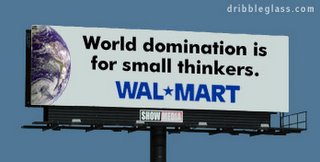 People who have known me for a while know I don’t have a great opinion of Wal*Mart. I grew up in a small town. We had a flourishing downtown area with multiple Mom and Pop stores situated around the courthouse. There were several clothing stores, a paint store where you could also register your china pattern, a music store that sold the latest records AND instruments, pool halls, dime stores, drug stores, and hardware stores, all ran by people who knew exactly where every small part was and could tell you how to use it. Now there are streets lined with nothing but empty storefronts and lawyer’s offices. Even the lawyers have to go out to the interstate exit to eat lunch. You can’t buy corduroy anywhere.

I worked for Wal*Mart in Missouri... decades ago, back when it was a small chain nobody had heard of outside the Midwest. Sam Walton would drop by occasionally. I married a Wal*Mart manager. Things have certainly changed since then! And I’m sure you’ve noticed. A lot of folks have.

The Toad Report on Wal*Mart.

Wal*Mart: The High Cost of Low Price is a documentary available on DVD. Here are some of the funnier parts.

Wake Up Wal*Mart! is a website asking for your input and participation.

Wal*Mart Watch is a group keeping an eye on the company's practices.

The man who said no to Wal*Mart. My next lawn mower will be a Snapper.

Or if you don’t want to read any of the information listed above, you can just let John Stewart give you the short version, and a laugh. 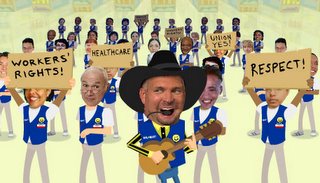 Garth Brooks sold his latest collection of music exclusuively through Wal*Mart. I got Friends with Low Wages.

The Onion weighed in on Wal*Mart’s PR campaign.

You might be a redneck if....
your baby's first words are... "Attention Walmart shoppers."

BENTONVILLE, ARK (AP) - Some Walmart customers soon will be able to sample a new discount item -- Walmart’s own brand
of wine. The world’s largest retail chain is teaming up with E&J
Gallo Winery of Modesto, Calif., to produce the spirits at an
affordable price; in the $6-8 range. While wine connoisseurs may
not be inclined to throw a bottle of Walmart brand wine into
their shopping carts, there is a market for inexpensive wine,
said Kathy Micken, professor of marketing at Roger Williams
University in Bristol, R.I. She said: "The right name is
important." So, with that in mind, here are the top 12 suggested
names for Walmart Wine:

And the number 1 name for Walmart Wine... 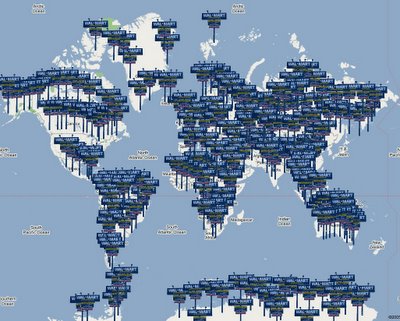 Ways to Have a Fun Time At Wal*Mart

Take shopping carts for the express purpose of filling them and stranding them at strategic locations.

Set all the alarm clocks to go off at ten minute intervals throughout the day.

Run up to an employee (preferably a male) while squeezing your legs together and practically yell at him "Where are your tampons?"

Try on bras over top of your clothes.

Make a trail of orange juice on the ground, leading to the restrooms.

While walking around the store, sing in your loudest voice possible "I smell sex and candy"

Walk up to an employee and tell him in an official tone, "I think we've got a Code 3 in housewares," and see what happens.

Tune all the radios to a polka station; then turn them all off and turn the volumes to "10."

Challenge other customers to duels with tubes of gift wrap.

Re-dress the mannequins as you see fit.

Test the fishing rods and see what you can "catch" from the other aisles.

Set up a tent in the camping department; tell others you'll only invite them in if they bring pillows from Bed and Bath.

Contaminate the entire auto department by sampling all the spray air fresheners.

Nonchalantly "test" the brushes and combs in Cosmetics.

When someone asks if you need help, begin to cry and ask, "Why won't you people just leave me alone?" 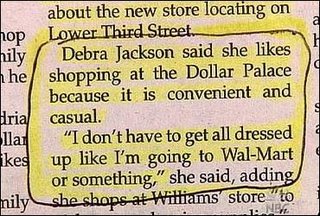 Look right into the security camera, and use it as a mirror while you pick your nose.

Take up an entire aisle in Toys by setting up a full scale battlefield with G.I. Joes vs. the X-Men.

Ask other customers if they have any Grey Poupon.

While handling guns in the hunting department, suddenly ask the clerk if he knows where the anti depressants are.

Switch the men's and women's signs on the doors of the restrooms.

Dart around suspiciously while humming the theme from "Mission Impossible."

Set up a "Valet Parking" sign in front of the store.

In the auto department, practice your "Madonna" look with various funnels.

Hide in the clothing racks and when people browse through, say things like "pick me!! pick me!!" and scare them into believing that the clothes are talking to them.

When an announcement comes over the loudspeaker, assume the fetal position and scream, "No, no! It's those voices again!"

Go to an empty checkout stand and try to check people out.

Get boxes of condoms and randomly put them in peoples carts when they don't realize it.

Drag a lounge chair on display over to the magazines and relax. If the store has a food court, buy a soft drink; explain that you don't get out much, and ask if they can put a little umbrella in it.

Go into the dressing room and yell real loud "Hey, were out of toilet paper in here!" 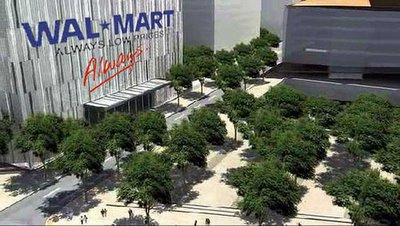 Proposal for the Freedom Tower at the World Trade Center site.

Thought for today: "A new poll reveals that 56% of Americans believe that Wal-Mart is bad for the country, while the other 44% work there." --Amy Poehler

Wal-Mart. Ugh. I'd rather be flogged than go there -- especially during peak hours.

Boy this is confusing. Just WHAT IS your opinion of WalMart? It's hard to tell...

Hi, Miss Cellania. Thanks for the visit and the comment. Too bad you didn't get an invite to your reunion; I think I'd call somebody and ask why.

I love this post on Wal*Mart, especially the quote about not having to dress up for the Dollar Store....LOL

Anything that even hints at bashing WalMart is alright by me.
...I know you like Bush bashing - Have I got a post for you. Check out my 1/22 post, "Beating Around The Bush."
(Disclaimer: Not responsible for injured sides while laughing.)

Hale, I don't mind you advertising over here, but I CANNOT LOAD your blog! I wanted to read "objects are closer" or whatever it was, and now this, and its driving me nuts! Why don't you copy and email me the raw script?

WalMart sucks and little boys are awesome to raise. THeir curiosity may end up costing you thousands of dollars, but their quest for adventure is unending. :)