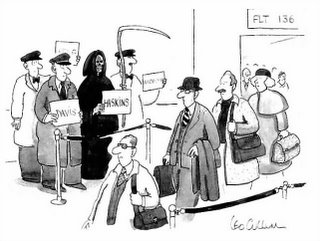 That crazy woman will post about anything, won't she? Here's a subject too many people want to avoid. We're all gonna face death sooner or later, often someone else's before our own. You can't stop it, all you can do is live your life in a manner that will leave you with few regrets at the end. Then again, you can argue that laughing at a serious subject IS avoidance. So be it. I'm here to prove you can laugh at (almost) anything if you look hard enough. YES YES, we LAUGH in the face of death! HA HA HA HA!

Excuse me. I just got a little carried away there. Where was I? Oh, death.

I saw this article entitled The Odds of Dying, and thought, “I know this one! 100%”. But it talks about HOW you might die.

Cartoon: The Grim Reaper Show. Not for the squeamish. Don’t let kids see it.

Interactive Autopsy. I didn’t try this, I’ve got my limits.

The Grim Reaper will guess your age here. I love this site! Look at what age it guessed me! I have a sneaking suspicion the database may be pandering.

Calculate how long you have left with The Death Clock.

The Voluntary Human Extinction Movement does not have a death wish for themselves, just for the Human Race. 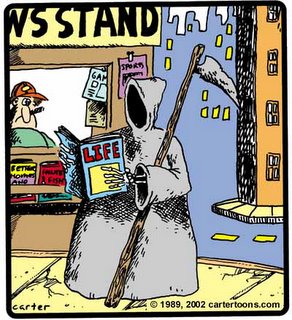 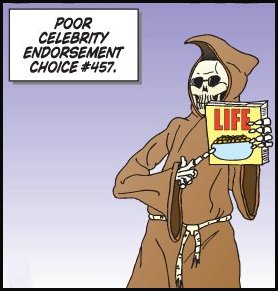 In a courtroom in Oklahoma, a person is on trial for murder. There is strong evidence indicating guilt; however, there is no corpse. In the defense's closing statement, the lawyer, knowing that his client is guilty and that it looks like he'll probably be convicted, resorts to a clever trick.
"Ladies and gentlemen of the jury, I have a surprise for you all," the lawyer
says as he looks at his watch. "Within one minute, the person presumed dead in this case will walk into this courtroom," he says and looks toward the courtroom door. The jury, somewhat stunned, all look on eagerly. A minute passes. Nothing happens.

Finally, the lawyer says, "Actually, I made up the previous statement. But you all looked on with anticipation. I therefore put it to you that there is reasonable doubt in this case as to whether anyone was killed and insist that you return a verdict of not guilty."

The jury, clearly confused, retires to deliberate. A few minutes later, the jury returns, and a representative pronounces a verdict of guilty.

"But how?" inquires the lawyer. "You must have had some doubt; I saw all of you stare at the door."

The representative answers, "Oh, we did look. But your client didn't. 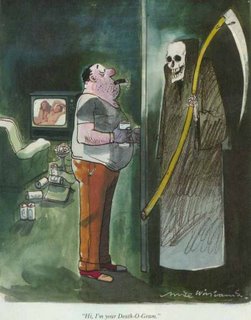 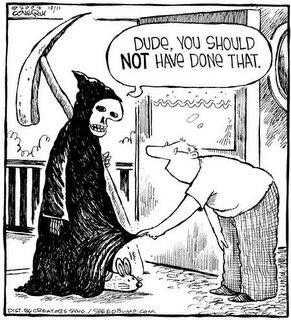 Two women were new arrivals at the pearly gates and were comparing stories on how they died:

1st woman: I froze to death.

1st woman: It wasn't so bad. After I quit shaking from the cold, I began to get warm and sleepy, and finally died a peaceful death. What about you?

2nd woman: I died of a massive heart attack. I suspected that my husband was cheating, so I came home early to catch him in the act. But instead, I found him all by himself in the den watching TV.

1st woman: So what happened?

2nd woman: I was so sure there was another woman there somewhere that I started running all over the house looking. I ran up into the attic and searched, and down into the basement. Then I went through every closet and checked under all the beds. I kept this up until I had looked everywhere, and finally I became so exhausted that I just keeled over with a heart attack and died.

1st woman: Too bad you didn't look in the freezer -- we'd both still be alive.

THE LAST PHOTO HE EVER TOOK 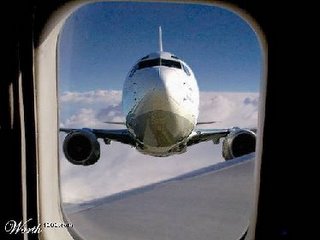 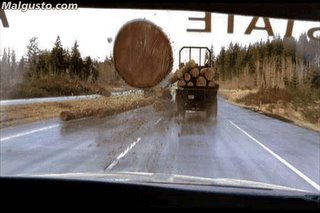 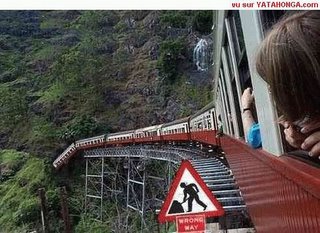 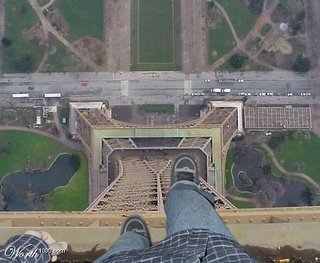 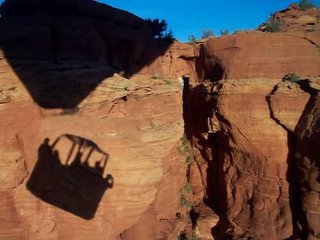 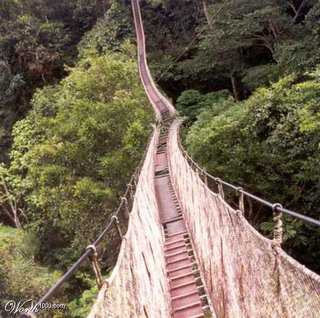 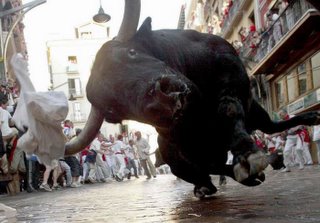 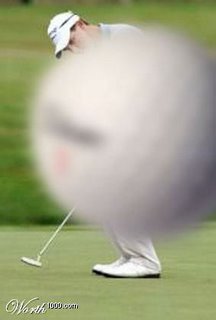 Thought for today: Some people are so afraid to die that they never begin to live. -Henry Van Dyke

I don't think you're CRAZY! Just more like FUN! I almost always get a kick out of your posts. Keep it up! ~ jb///

Whoa! I came over to thank you for visiting and look what I find! This is great! I had more fun with your links on this one. Guess what? I'm 29, too. :-)

Nicely done. I think you should treat yourself to a copy of Bodies in Motion and At Rest by Thomas Lynch. You'll love it- guaranteed.

Those are some great photos. LOL

i find death really really funny :D thanks for the good laughs, but the grim reaper calculator age thing, crazy! hit it right on the dot.