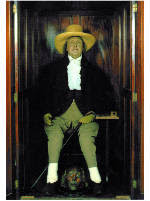 6 Restless Corpses. This article has nothing to do with the supernatural; it’s about real bodies that just can’t seem to rest in peace, or at least had to wait for their chance.

Patrick from Denmark doesn’t limit himself to one kind of bodymod. He’s a work in progress with piercings, scarring, tattoos, and implants. (via J-Walk Blog)

Top 7 Films To Get You Laid.

The Religious History of Beer. Includes a handy beer blessing.

Medical Confessions. Five doctors spill the beans about annoying patients, malpractice, how much they drink, and more. (via Dark Roasted Blend)

The Cowboy Outfits pool on Flickr. (via Everlasting Blort)

lowercase L is a blog dedicated to signs that use uppercase letters, except for L, which makes it look like and I. I didn’t know it was so common! (via mental_floss)

The People’s Mario stars Mario as a Soviet-style worker/hero who fights the evil mushrooms. The look is reminiscent of classic propaganda posters.

41 Hilarious Science Fair Experiments. That happens when you try to do something new and different with no equipment, budget, or clue.