A year ago today, there was a bit of a shakeup in the political Blogophere when Atrios declared Blogroll Amnesty Day. He then dumped a large part of his blogroll, which set off some resentment and hard feelings among those that were dropped and others who thought it an underhanded and totally misnamed tactic. A year later, Jon Swift encourages everyone to open up their blogrolls to give smaller blogs an opportunity to be publicized.

I am all about links h 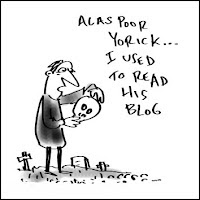 ere at Miss C Recommends. I want to expand my own sphere of information, and try to check out blogs I’ve never read before as much as I can. You should, too. All that smaller blogs are asking is that you try them out. They will sink or swim according to whether they connect with readers. If you find something you like, you’d certainly want to recommend them. If you want to check out some new political blogs you’ve never encountered before, there are recommendations at Simply Left Behind today. Jon Swift is posting links to many Blogroll Amnesty Day posts which contain more link lists. Skippy the Bush Kangaroo has quite a few posts on this.
Posted by Miss Cellania at 2/03/2008 08:03:00 AM