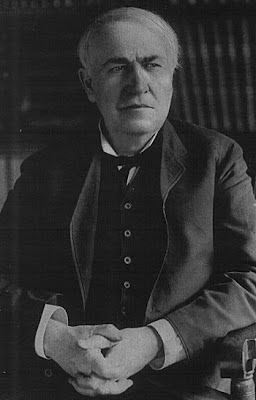 Happy Birthday to inventor Thomas Edison, who was born on February 11, 1847. If he's had the foresight to invent a longevity machine, he'd be 161 years old today.

Thomas Edison received his first patent in 1869, at the age of 23. It was for an "electrographic vote recorder," which allowed a legislator to cast a vote for or against an issue by turning a switch either left or right. It was a complete flop, ironically because it was too efficient and interfered with the ability of pols to lobby for vote-switching -- something that was commonly done during the time it took to count votes by hand.

Edison eventually held 1,093 patents. Whenever you flip on a light switch, listen to music, or watch a video, Edison had a hand in it. Wired has a condensed look at Edison’s career. See a video of Edison talking about the light bulb.

Edison complained that his first wife wasn't a great inventor. He proposed to his second wife via Morse Code. And then there was that incident with the elephant... Read Ten Fascinating Facts about Thomas Edison.
Posted by Miss Cellania at 2/11/2008 12:59:00 AM